Such an unappealing name for a tasty delicacy!

Head Cheese is not cheese at all.  In fact, it is made from high-quality meats from the head of pig or calves.  I must add, not brain!  The meats are cooked, shredded or diced and then suspended in broth gelatin also known as aspic.  Head Cheese is a terrine.

Where did Head Cheese come from?

Head Cheese originated in the Middle Ages, as a way to preserve meat.  (I also touch on this in this pie crusts).  Each European country has a version of this terrine.

Where did the name, “Head Cheese” come from?

According to Chef Perry at Deep End O’ The Pool, cheesing referred to pressing food into a loaf and weighing it down and chilling it.  This term goes back to the 1700s.  Cheese did not specifically relate to the dairy products we associate with.  Another name you may see in North American Delis today is “Head Loaf.”  Perhaps that sounds more palatable.

Recently we processed two of our hogs, or I should say my son and in-laws raised hogs and, with the help of local Mennonites, processed the hogs.  Rarely one to allow anything to go to waste, I accepted the heads rather than allow them to be tossed out.  I “decorate” with hand me downs, compost everything I can, repurpose cardboard for mulch, and get as many “lives” out of things as I can.    It’s equally important to me to fully utilize the animal as a responsibility of raising animals.

Anyway, this explains why I couldn’t say “no” when offered these heads.

As I had not made head cheese nor eaten or even seen it in the past, I had some research to do.  The more research I did, the better I felt about the final product.  I realized that I like pork, I like tender bits of meat, and I like cooled meat jelly (think about the bottom of a pan of turkey).  I knew that if I could figure out how to properly dismantle the head itself, this could be successful.

Making head cheese is easy….. but the process is long and slow.  I’ll take you through the steps I took and what I’d do next time differently.  Also, there are other shortcuts one can take when making head cheese, including not using a head at all.  I should note that I did not use every part that some use when making this, such as the trotters (feet).

First of all, I had to freeze the heads until I could get the time set aside for this project.  The heads were fulling intact, meaning, they were hairy, had all the parts (except the tongue, which the Mennonites used), and were entirely unprocessed.

This became my first challenge.  To cook the heads correctly, I had to prep them.  The first step was to scald the head to be able to scrape off the hair.

Place the head in the water for 2-3 minutes.

Be sure agitate the head.

Also, start at the low end of the temperature range and the minimum time.  The hair should come off easily.  If it doesn’t, increase the temperature of the water and potentially the length of time in the water.  If it is too hot, the hair will set in the follicles and make it nearly impossible to remove.

Almost immediately, I ran into trouble.  The hair would not come off the skin, in fact, the skin slipped off when I scraped it, leaving the layer of fat exposed.  After some discussion about this with my advisory board (aka Mom), we determined that scraping may not work on a frozen hide.  Perhaps scraping should or can only be done on a fresh or refrigerated hog.  In my situation, it would’ve been best to skip the attempt to scrape and simply skin the head.  The process was messy and took a long time.

The second step in prepping the heads was less enjoyable.  I needed to split the heads to remove the brain and eyes.  I used a heavy duty hand saw and only needed to rest a few times during the process!  It’s important to keep the blade straight and cut mid-line as the skull naturally has breaks between the eye sockets and nasal passages.  If your saw blade drifts (as mine did on one of them), you will spend an unnecessary amount of time sawing through bone.

Once the skulls were in halves, removing the brain was next.  Three of the halves went smoothly, meaning, I was able to remove the brain by removing the membrane that surrounded it, and it came out cleanly.  The fourth half was a soupy mess.  No explanation for that but the longer I manipulated it, the more deformed it became and fell apart on me.

The eyes came out neatly, though not without work.  Many ligaments hold eyes in place.   It was simply a matter of following the ligament to the attachment point on the skull and severing it.  These came out cleanly.

As the final step, I took each half to the sink and thoroughly cleaned it.  This is the product that will make your head cheese and should be as clean and sanitary as possible.

Tip #1:  Have a shop prep your head!!  As an alternative, skip scalding and skin the head.

Finally.  Preparing the meat and broth is similar to making chicken soup and a great way to think of it.  Cover the heads with water.  Season the water with onions and your favorite seasonings (salt, pepper, thyme, rosemary, etc.).  Simmer the heads until the meat is falling off the bone.  This takes 3-4 hours.  Once the meat is tender, remove the head from the broth and save the broth.

I needed to use a very large stock pot as the heads were quite big.  I had to cook it in two batches.  I was extremely picky about the meat that I selected and also did not use the cartilage in the snout or ears.  I wasn’t sure I wanted that texture in the finished product, especially since I was a newbie to eating head cheese.  Basically, I’m saying that I didn’t want to gross myself out!  I did, however, cook the hearts and liver in a broth and dice these into half-inch pieces to add to the final product.  I then decided I still might not have enough meat so I roasted a pork shoulder (pork butt), as it is a relatively juicy and fatty cut and diced that as well.

Tip #2:  Use a pressure cooker to cook the meat, essentially halving the time it takes to cook the meat and increasing the available collagen that is necessary for the jelly.

Once the meat was removed from the broth, I strained it through a cheesecloth.  I set the broth in the refrigerator overnight and strained it again to remove the solidified fat and any remaining particles.  I then brought the broth to a simmer and let it go until it was a quarter of the level I started with.  This also took a long time, as I said, I started with a very large stockpot.  I let it simmer for hours while I worked on other projects.

Tip #3:  Begin testing the broth for thickness once it’s cooked down by 1/2.  Place several tablespoons in a bowl and place it in the refrigerator for 30-60 minutes to test for thickening.  I began testing too late and likely would’ve been fine simmering to 1/2 to 1/3rd my starting level.

Once the meat was cooked and cooled and the broth was at the appropriate thickness, I lined a bread pan with plastic wrap and layered the meat in the bottom, covered with some broth, layered with more meat, then more broth until 1/2 from the top of the pan.  These were set in the refrigerator to set up overnight. 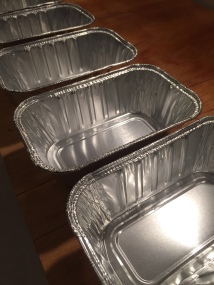 Placing the meat in the pans 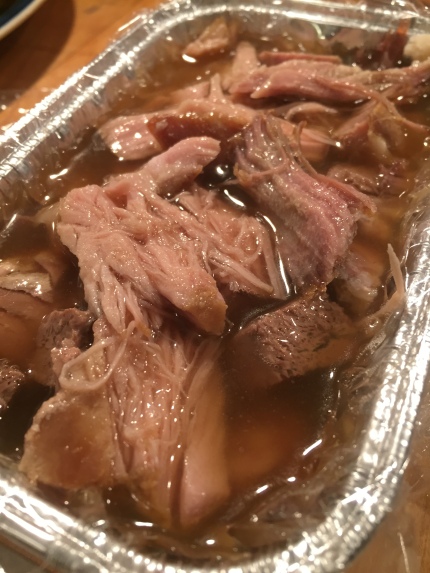 Head Cheese ready to set up in the refrigerator

After two days of work, the project was complete!  Head cheese can be served cold or at room temperature.  It is offered with slices of bread or crackers and mustard or vinegar depending on preferences.

In the end, I had plenty of meat but ran low on the broth.  I had enough for four mini pans.  For the remainder of the meat, I made a broth from chicken stock, seasoned it well and used gelatin as a thickener.  I then added vinegar to this batch.  Pickled head cheese is called “Souse.”

There are many versions of head cheese recipes, some include vegetables, pimentos, cured meat, stuffing in casings, etc.  I think there are many ways to put this together.  In my next batch, I will use much finer pieces of meat and tighten up the gel more in an attempt to allow me to slice it thinly, similar to lunch meat.

This was definitely a project I’m happy to have tried.  It gave me a new appreciation for rustic foods and the value of using all parts of the animals we raise.  Please share your experiences with eating or making head cheese.  I’d love to hear more about this unique treat.

Adventurer, Discoverer and Seeker of things new and old! View all posts by Andrea

Andrea Krzanowski/Hog Creek Homestead is a participant in the Amazon Services LLC Associates Program, an affiliate advertising program designed to provide a means for us to earn fees by linking to Amazon.com and affiliated sites.

© Andrea Krzanowski and Hog Creek Homestead, 2020. Unauthorized use and/or duplication of this material without express and written permission from this site’s author and/or owner is strictly prohibited. Excerpts and links may be used, provided that full and clear credit is given to Andrea Krzanowski and Hog Creek Homestead with appropriate and specific direction to the original content.